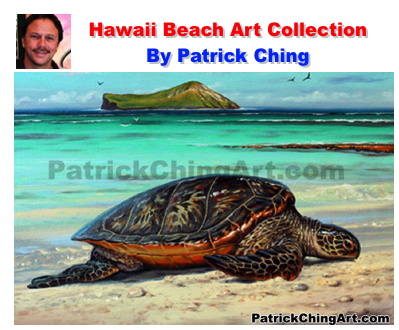 Hawaii has plenty of picturesque beach locations worthy of being immortalized in paintings. Patrick Ching, Hawaii's premier nature artist, has done just that. From the Waimanao Beach to various Hawaii beaches and nature paintings, Patrick captures the beauty of Hawaii in his Hawaii Beach Artwork Collection.

Browse through his collection and find out how you can own one today! Here you can see all of Patrick's artwork featuring scenes from Hawaii beaches.

Click here for how to commission Patrick Ching to paint a image for you if the item is sold.


Back to the top

Honu Moon Mokulua
Inspiration: A honu comes ashore on a beach where turtles have not visited for many moons. The Mokulua Islands off of Kailua Beach duplicate the shape of the Hunu's shell. Inspired by a previous Ching painting entitled Green Peace. More...

Secluded Beach
Inspiration: A secluded beach and open sky is a place we all should visit. With miles of open space before us our thoughts can drift forever. More...

Waikoko Palms
Inspiration: One of the most beautiful stand of coconut palms. The peaceful lagoon glimmers with aqua blues and greens that sooth me. In the foreground are the Pohuehue beach morning glory flowers. More...

Honu Beach
Inspiration: A Honu or Green Sea Turtle hauls up to sun itself on a beach in tropical Hawaii. If they continue to have protection, these animals may be seen nesting in places that they have not nested in for hundreds of years. More...

Shadow's Secret
Inspiration: There are many things known only to Shadow, Kauai's beloved water dog, contemplating a tide pool at Secret Beach. More...

Kalalau
Inspiration: A tiny corner of beach and trail offset the colors of a Kalalau Valley's deepening sea. Shadows of clouds dapple the surface. More...

Tunnel's Wahine
Inspiration: From above the reef at Tunnels Beach, Haena Kauai. More...

Beach Candy
Inspiration: Putting my sight in the eye of a bird, I hovered above the beach fronting the Moana. Endless waves of energy rolled in - exciting, rejuvenating, healing. People and playthings sprinkled with color like candy on an ocean cake. Which one are you? More...

West Side White Tails
Inspiration: This scene is from the Kilauea Point National Wildlife Refuge lighthouse area looking west towards the cliffs of Kauapea and Anini beach. Soaring on the west side are white tailed tropicbirds. A seabird that often soars in the mountains and nest in the cliffs. Their long White tail feathers were used in ancient times by Hawaiians to decorate Kahilis or feathered standards to signal the arrival of royalty. More...

Sherwood's Waimanalo
Inspiration: To get this view of Mount Olomana and Waimanalo one must be in the shallow, emerald colored waters near the Kaiona boat ramp. In the distance are the beach and ironwood trees of the area known as Sherwood Forest. The title of this painting is in reference somewhat because of the view looking toward Sherwood Forest, but more so because the painting was commissioned by a true friend of Hawaii's environment named Mike Sherwood. More...

Olomana Greens
Inspiration: From the title, one would think this would be a painting of a golf course. “Olamana Greens” is actually a celebration of green colors; those of the majestic mountain view windward Oahu, and also the aqua greens that artist Patrick Ching was inspired to do this painting while viewing Olomana Green, from a canoe off Bellow’s Beach. More...

Rabbit Head
Inspiration: On a calm Kona wind day the Island of Manana seems to float on the ocean just off Waimanalo Beach. Manana, which literally means “buoyant,” is the Hawaiian name of this island, which is also known as “Rabbit Island”. It was named so because rabbits once inhabited it and it also resembles a rabbit swimming with its head above water. Manana is the nesting ground for thousands of seabirds including wedge-tailed shearwaters and sooty terns shown gliding over the water. More...

Horizon
Inspiration: Taking your child for a horseback ride on a Secluded Beach is one measure of wealth.

This mom and son look toward the horizon and think about loved ones far away. The horse in this painting is Ehukai, a magical mare in the care of artist Patrick Ching More...

Dreams of Paradise - (A Honu Seal Sunset)
Inspiration: There are places where Monk Seals and Sea Turtles come ashore and occasionally rest beside each other. Monk seals will snuggle up to anything as I learned the first time I slept on the beach outside my tent on Laysan Island in the Northwest Hawaiian chain. This painting was inspired by a photograph taken by George Balazs, Hawaiian sea turtle expert. The original photograph can be seen in the book I authored called The Hawaiian Monk Seal. It was a cloudy shot that I recomposed with a Honu I saw at Punalu'u Beach, Big Island, Hawaii. I painted the scene with a sunset setting. It was a great challenge to create the multi colored sunset reflections on the animals More...

Kahili Beach
On Kauai's north shore is a serene spot where the river meets the sea. Great frigate birds, called ‘Iwa, swoop down to drink the delicious water.

Beyond the beach waves break in the emerald colored lagoon.
This is one of artist atrick Chings favorite places on Earth. More...

Waimanalo Beach
Inspiration: Waimanalo Beach was painted on the windward side of Oahu at a place called Waimanalo known to locals as God's Country. Wispy ironwood trees grow above the succulent naupaka shrubs as you look out towards Bellow's Beach and the Mokulua Islands. Seabirds comb the shoreline as a wave breaks upon a white sand beach. This is where artist Patrick Ching spends his mornings exercising being thankful. More...

Sandy's Seal
Inspiration: Hawaiian Monk seals frequent often play in the surf near Sandy's Beach. Artist Patrick Ching caught a body surfing wave at Sandy's and was surprised to see the shape of a monk seal gliding through the same wave. Though monk seals are becoming rarer they are continuing to frequent Oahu's East Shore. More...

Manana Girl
Inspiration: Twenty years ago, seeing a Hawaiian Monk seal on the main Islands was like seeing a mermaid according to Patrick Ching. Their range was mainly restricted to the protected Northwest Hawaiian Islands. Now they are much more common with seals being born on the main islands each year. In the distance is Manana island, nicknamed Rabbit Island. Occasionally, seals are born on Manana and venture to nearby beaches such as Sandy's Beach and Makapu'u. This young seal is resting under a native heliotrope shrub with beach morning glory in the foreground. More...

Laysan Apapane
Inspiration: The crimson colored 'apapane honeycreeper existed on Laysan Island in the northwest Hawaiian chain. Artist Patrick Ching lived months of their life on this island as a wildlife biologist and ranger. Ching never saw the laysan 'apapane because it had gone extinct many years earlier.

The male singing on the erogrostic grass was painted from a clack and white film clip of one the last three birds in existence just before a storm blew the birds into extinction. A laysan rail (also extinct) approaches the center of the painting. Also included in the painting are the lay laysan finch, Hawaiian monk seal and the green sea turtle. The plant life includes the nama, native portulacca, erogrostis grass and phouehue, beach morning glory. More...

Hawaiian Atoll
Inspiration: As a wildlife ranger Patrick Ching spent a good part of his life on the remote atolls of the Northwest Hawaiian chain. This painting was done for the Conservation Council for Hawaii's 2006 wildlife poster.

On the remote Northwest Hawaiian Islands green sea turtles gather in the summer months to mate, lay eggs and bask on the warm sandy beaches. Look for this picture in Ching's book entitled HONU - Sea Turtles of Hawaii.
More...

Ginger Beach
Inspiration: A buckskin Arabian mare named Ginger inspired this painting entitled "Ginger Beach". Ginger prances at the shoreline with attitude as an emerald colored wave breaks behind her. A horse on a beach is certainly a Hawaiian dream come true. More...

Bellows Inlet
Inspiration: Bellows Inlet is an image painted at the northern end of Waimanalo Bay on the island of 'Oahu. Bellows Beach is part of Bellows Airfield, a military base which is also a popular campsite used by current and retired military personnel.

The tide pushes inland through a jetty that becomes a river in times of rain. In the foreground migratory shorebirds called Ruddy Turnstones or 'akekeke search for morsels such as small crabs and fish. More...

Please send questions about this website to
Copyright© 2017 - 2021 BeachStand.com. All rights reserved.
Terms of Use / Legal Disclaimer / Privacy Statement
Site Designed and Managed by MacBusiness Consulting 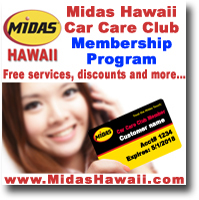