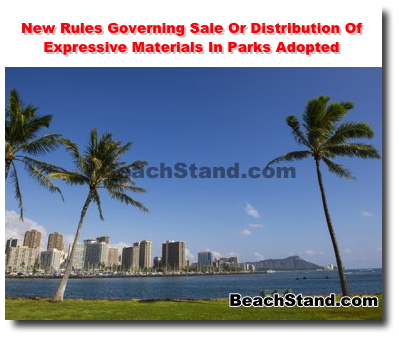 Honolulu -- New rules are now in effect concerning the sale or distribution of expressive materials in city parks.

The prior "Rules and Regulations Governing the Sale of Message-bearing Merchandise by Nonprofit Organizations in City Parks and Facilities" has been repealed, and new rules under Honolulu Administrative Rules Title 19, Chapter 18 entitled "Sale or Distribution of Expressive Materials" have been adopted.

Under the new rules, expressive materials are permitted for sale and distribution. Expressive materials are defined as any written or printed material containing political, religious, philosophical or ideological messages. This includes, but is not limited to: books, pamphlets, handbills, cards, circulars, pictures, magazines, and leaflets.

Additionally, there are numerous items defined as merchandise whose sale is prohibited under the new rules. The items include, but are not limited to: food, drink, coffee mugs, beverage containers, sunglasses, flags, records, patches, maps, jewelry, handicraft, decals, audio or video tapes, shirts, hats, ties, shorts, footwear or any other clothing article.

Sales permits approved under the old rules for the month of September 2017, prior to the implementation of the new rules, will be honored.

Other rules for permitted sales within parks, such as those outlined by temporary concession permits and designated concessionaire agreements, are not affected by these new rules as they do not apply to the sale and distribution of expressive materials in conjunction with a First Amendment activity.

Under the new rules, a permit is necessary for use of a portable table, within a designated area, for the purposes of selling or distributing expressive materials. The designated areas are located where there will be minimal impact to other park functions and facilities. The portable tables and all materials must be removed from the site each day and nothing can be stored at the park location. Permit applications for these activities will not be accepted more than a year before the proposed request date and cannot be used for a period lasting longer than 14 days.

The Department of Parks and Recreation reserves the right to seize and dispose of any merchandise being sold or distributed on park land in violation of these rules.

A public hearing was held on these proposed changes on February 22, 2017 at the Mission Memorial Building, with public notice given beginning on January 20, 2017.

The new rules are available online at parks.honolulu.gov in the "Rules & Regulations" section.